Amy Klobuchar
Senator (D-MN)
U.S. Senator Amy Klobuchar is the first woman elected to represent the State of Minnesota in the United States Senate. Throughout her public service, Senator Klobuchar has always embraced the values she learned growing up in Minnesota. Senator Klobuchar has built a reputation of putting partisanship aside to help strengthen the economy and support families, workers, and businesses. In 2019, an analysis by Vanderbilt University ranked her as the “most effective” Democratic senator in the 115th Congress.

Since arriving in the Senate, Senator Klobuchar has worked with Democrats and Republicans to get things done. She led the effort to pass landmark pieces of legislation to end human trafficking and combat the opioid epidemic. She fought to pass the most significant consumer product safety legislation in a generation, keeping foreign toxic products off our shores and out of our stores, and pushed the cell phone companies to enact more consumer-friendly policies. Additionally, her efforts to protect consumers have resulted in the largest furniture and airbag recalls in American history.

As a member of the Joint Economic Committee and the Senate Commerce Committee, Senator Klobuchar has been a leader in working to implement a competitive agenda to ensure businesses have the tools they need to grow and create good jobs in their communities and support them during the pandemic.

Senator Klobuchar also serves as the Chairwoman on the Judiciary Subcommittee on Competition Policy, Antitrust, and Consumer Rights, where she has worked to reinvigorate America’s antitrust laws and restore competition to American markets. In this capacity, she introduced legislation to give federal enforcers the resources they need to do their jobs, strengthen prohibitions on anticompetitive conduct and mergers, and make additional reforms to improve enforcement. Senator Klobuchar is also the Chairwoman of the Senate Rules Committee, where she has worked to ensure fairness, transparency, and efficiency in government. During a Joint Session of Congress to receive each state’s electoral votes in the 2020 presidential election, she led the defense of challenges to Arizona’s and Pennsylvania’s electoral votes, working with a bipartisan group of her colleagues to stand up for our democracy.

Before serving in the Senate, Senator Klobuchar headed the largest prosecutor’s office in Minnesota for eight years, making the prosecution of violent criminals her top priority while increasing the office’s focus on white collar crime. 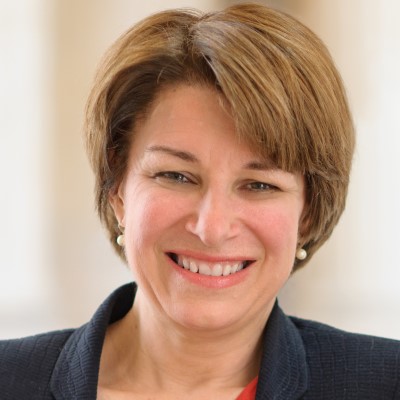